Tonight the North Shore Horticultural Society had its first in-person meeting in almost 18 months. We had our annual picnic at lovely Tuck’s Point in Manchester-by-the-Sea. Instead of taking photos, I used my time at the “Bring Your Own Everything” dinner to chat with people I haven’t seen in a year and a half. But here’s an old photo so you can see how nice it is.

Actually, it was even nicer than this. When I took this photo several years ago, it was an overcast evening. Tonight, the sky was clear blue, and there was brilliant sunshine on the water.

There was a wedding going on at the yacht club next door. I saw the ultimate Bostonian gent running from the parking lot to the ceremony wearing a straw boater, a seersucker suit and a red bow tie.

In addition to the NSHS Annual Picnic and the wedding at the Manchester Yacht Club, tonight was the night of the Strawberry Full Moon, the last “supermoon” of 2021. I left the picnic a little early because it was cold by the ocean. The temperature had dropped to 61 degrees. Although I was glad I brought a scarf and a jean jacket, I was wearing sandals, and I was freezing. So I got in my car and headed for Gloucester to look for the moon. I had checked the time of moonrise for the previous night, but not for tonight. I also didn’t know where in the sky to look for the moon. There’s a website that gives that info, but I was too lazy to pull over and search for it.

Here’s a photo that my friend took of the Strawberry Moon in Rockport MA. The sky is indeed strawberry! 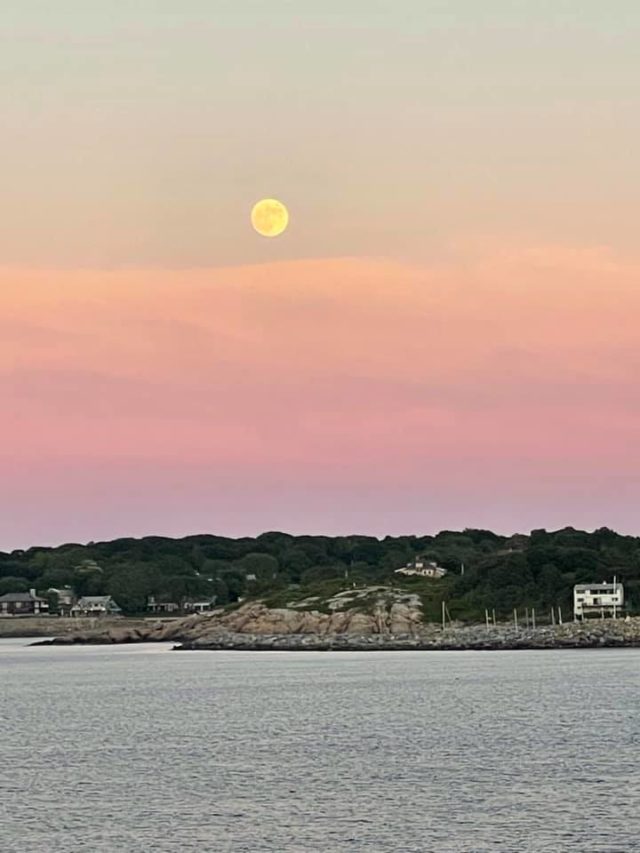 I drove along the ocean in Gloucester looking for the moon. Unfortunately, after a perfectly clear night last night, there was a bank of clouds over the horizon along the ocean. Boo. It was around 8pm, but no sign of the moon. On Wednesday, the moonrise was listed as 7:36pm so I thought it would rise around the same time. Wrong.

I kept driving north to Rockport, but nothing doing there either. Fortunately, Jeff called, and I asked him to look it up for me. Turns out the moon was rising in the southeast, so I turned around and headed south. Moonrise was at 8:45pm, more than an hour later than the night before. Sounds fishy, but that’s what it was.

I stopped at Back Beach in Rockport to wait for moonrise at 8:45. I had a good view of the ocean to the east with a spit of land capped by a lighthouse to the southeast. The sky was turning deep blue, but still no sign of the moon. I continued my drive south, and I turned left at Marmion Way, a long curving road that hugs the ocean for part of the way. Then I saw golden clouds on top of a deep blue sky. The Strawberry Moon was hidden by the clouds but its strawberry-peach light was coloring the clouds. From time to time, a sliver of pinkish-gold moon shown through the clouds. I wish I had a real camera instead of my 4 year old iPhone 7+. Unfortunately, my photos are awful and require your imagination. 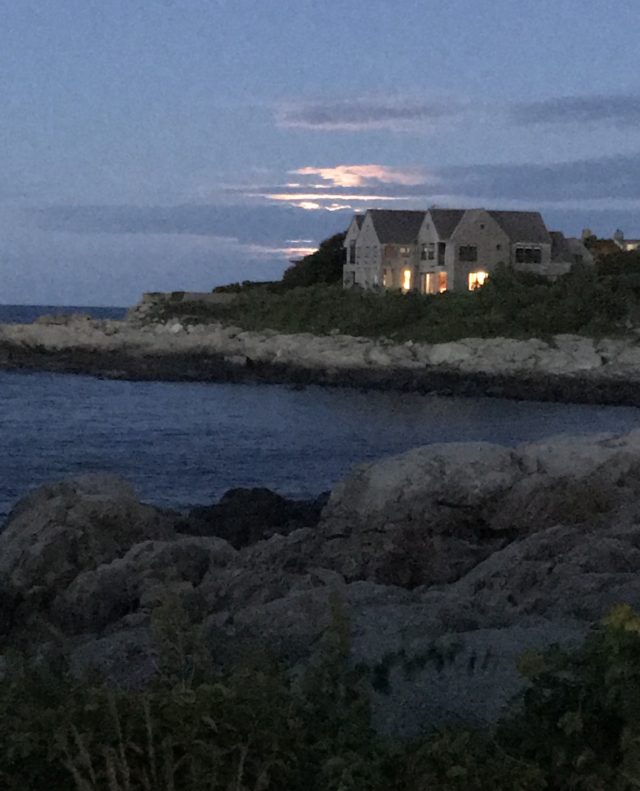 I continued my drive south, and my next stop was Cape Hedge, another beach in Rockport that’s popular with surfers. The Strawberry Moon looked stunning as it was partially revealed through the clouds. 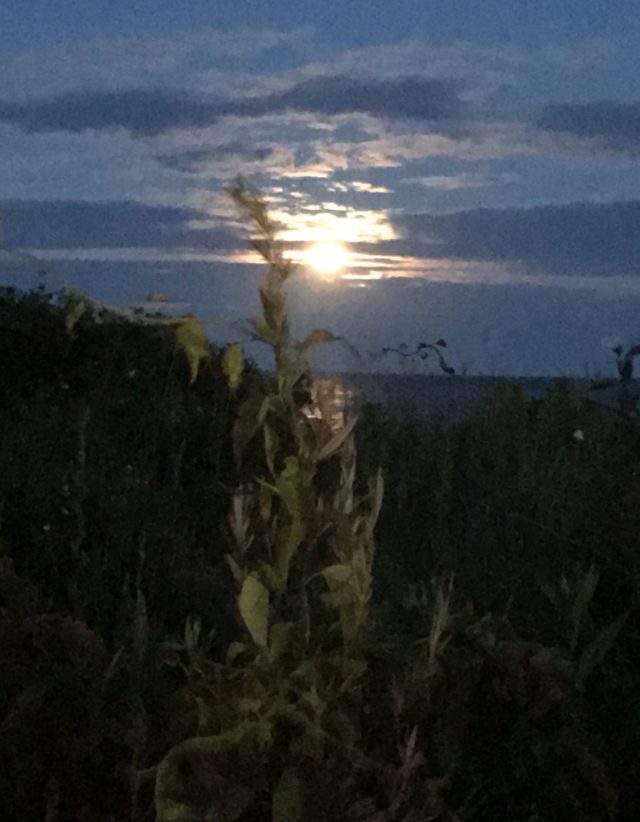 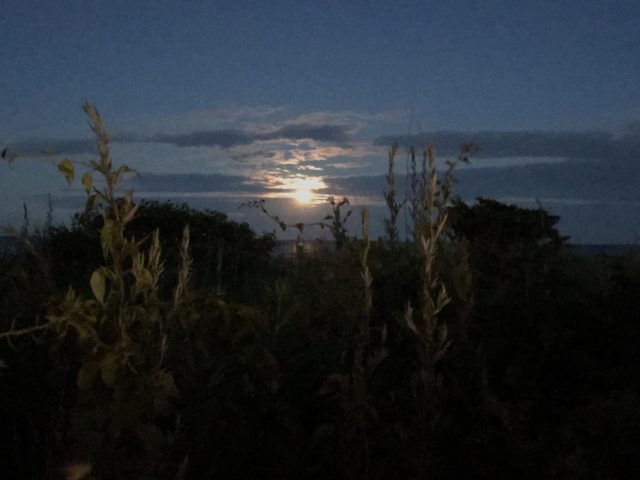 As the moon became completely covered by the clouds, I headed further south to Good Harbor Beach in Gloucester. I loved seeing the moon to the right of the iconic GHB house called the Birdcage – oh no, I cut out the house! 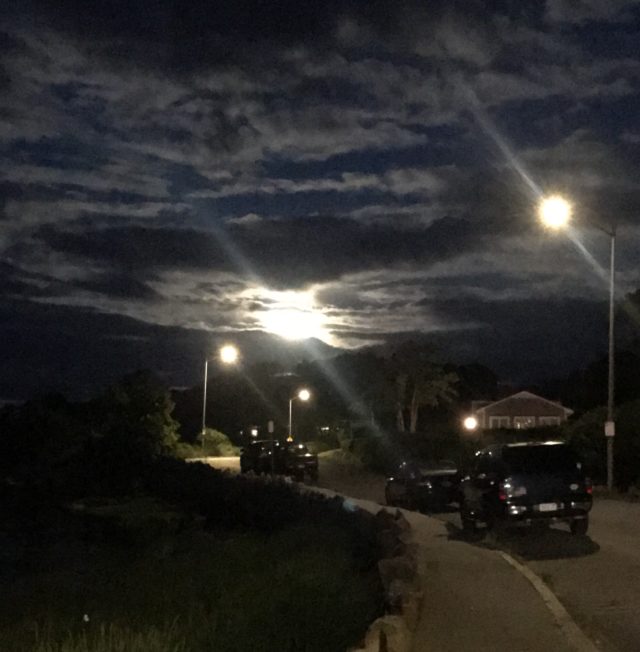 Finally, I drove another quarter mile to the Back Shore where I got a great view of the moon over the open ocean including one out-of-focus shot of the full moon. 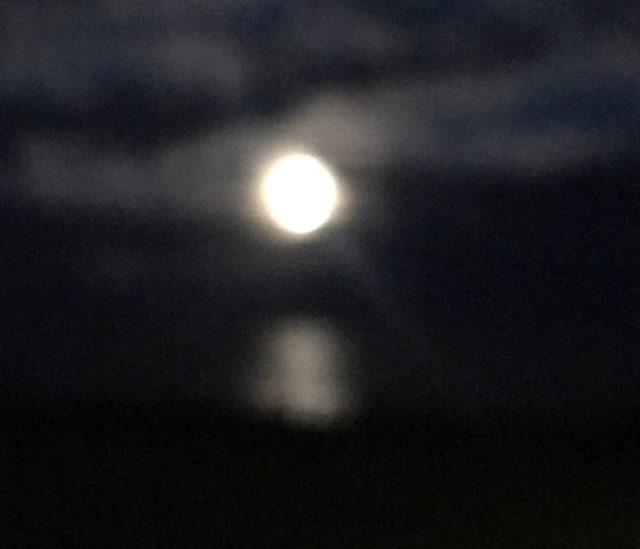 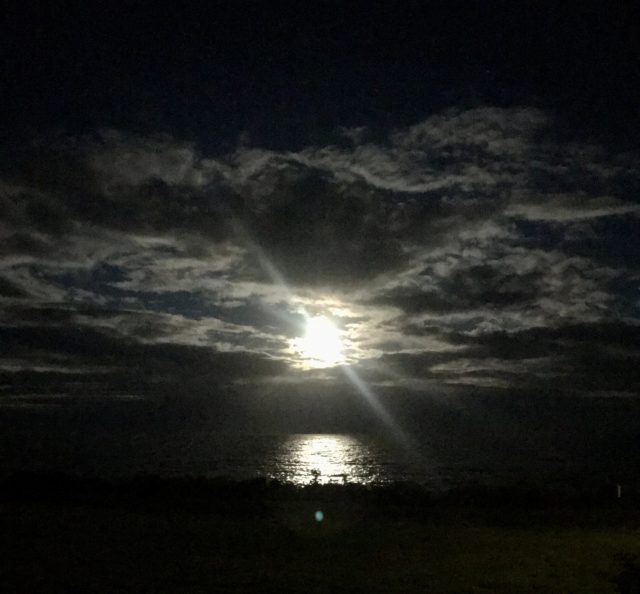 Quite a few people were on the beach or heading to the beach. Several cars were pulled over with people out looking for the moon.

Did you get to see the Strawberry Moon? What did it look like in your neck o’ the woods??